Project Cortex Could Be a Game-Changer – Overview

This fall Microsoft made the largest product announcement (in my opinion) since Microsoft Teams a few years ago (2017).  It was large enough that it received a good chunk of Satya Nadella’s Ignite Keynote.  It’s hard to nail down a single definition of the product.  With SharePoint, you have a tool focused on document organization, storage, collaboration, and information management.  With Microsoft Teams you have a similar purpose (it runs on SharePoint after all) but it focuses even more on small team collaboration.  Exchange is a no brainer.  But Cortex is something different.  I feel Project Cortex could be a game-changer for organizations.

In my opinion, Cortex (which may end up with a new name before it becomes generally available this spring) is a knowledge builder.  At its core, it takes your data (document content and metadata) and using both AI and human intervention organizes it into knowledge you can use.  Say you have a project occurring within your company and you have been assigned to it.  You receive an email from your manager saying he/she is assigning you to a project called CORE and you should familiarize yourself with it.  With Cortex, that information may already have been organized for you.  In that email, it may look like your boss gave you a link to a site on CORE, but in reality, Cortex has already stepped in.  Using AI-assisted knowledge mining it has scanned and indexed all the information the company has on CORE.  That link you see in your email?  That is something that has been injected by Cortex into your mail.  It’s called a topic card and contains an overview of the information about the topic your boss just sent to you (I cover topic cards more in a future post) 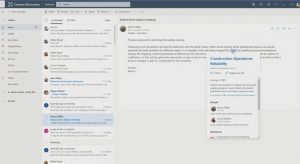 Project Cortex Could Be A Game Changer

I am going to be covering different components of Cortex in future posts, but I did want to discuss why I am really excited about this product.  I honestly haven’t looked forward to a product from Microsoft this much since Power Automate (Flow) and Power Apps were released.  It’s more than just what the product can do for an organization though.  It’s also what the project is doing for the Microsoft 365 landscape as a whole.  Cortex is going to be BIG.  It’s going to need a lot of power but also support from other components within Microsoft 365.  Already we are seeing improvements in many areas like SharePoint (more storage capabilities) and Search.  At Ignite it was even indicated that Azure Cognitive Services will get a boost because the limitations it has in file size and page number (for PDF importing) could be a huge bottleneck for Cortex.  It’s the innovations in the supporting components of Project Cortex that I see as another big win for the product.

In future posts, I am going to cover some of the features of Project Cortex in more detail.